Revitalize body and mind. Anti aging supplements in naturally premium potencies work to slow the aging process, restore energy and invigorate health. Top anti-aging supplements, formulated through medical research, may help to delay some normal aging processes. A healthy diet and lifestyle may not protect us completely as we age. To live life fully, we can benefit from exceptionally formulated supplements that fight aging within single cells and entire body systems. Fortunately, patented formulas have been developed to slow down, and possibly even reverse, declines in memory, productivity and activity. Mitochondria are our cell powerhouses and vital energy sources in the body. Scientific studies have shown that certain anti-aging formulas, including those recommended at MyVitaminDoc.com, rev up mitochondrial function, providing increased cell energy. Preliminary research also shows that these revolutionary anti-aging supplements may actually repair mitochondrial damage that’s evidence of aging. Enhanced performance, energy and memory are supported with supplements formulated through anti-aging science.

Defend yourself against aging, naturally. The latest progress in anti aging vitamins includes supplements that appear to increase the body’s energy molecules. So these are promising options for everyone from athletes wishing to maintain performance to chronic fatigue sufferers. Effective anti-aging vitamin ingredients help to safeguard health, boost energy, and support specialized needs, such as reducing the impact of Alzheimer’s. Plus, these vitamins have been proven to reduce age-related hearing loss. Dr. Michael Seidman, an expert on vitamins, hearing loss and aging, has valuable information to share. He has studied medically formulated vitamins for anti-aging that not only aid hearing but also potentially slow physical and mental declines. His anti-aging educational resources can help you learn more.

Patented formula to help slow -- and possibly even reverse -- declines in memory, productivity and activity due to aging.
This supplement proven to reduce age-related hearing loss and may even improve hearing in certain circumstances!
Scientific studies have shown this formula enhances memory and supercharges the mitochondria – the powerhouse, “energy factories” in all cells.
This formula restores healthy mitochondrial function, providing more energy to cells.
Professional athletes and individuals suffering from chronic fatigue syndrome say our supplement is perfect for enhancing physical performance, fighting low energy levels, and slowing some of nature’s normal aging processes.

Alpha lipoic acid (ALA) is a coenzyme necessary for normal mitochondrial function and energy production. This vitamin-like substance has been supplemented orally for health benefits and has also been used as a therapeutic agent in a variety of liver and brain disorders, as well as mushroom poisoning. It is also used as a treatment for diabetes and recent studies in our laboratory have demonstrated improvement in age related hearing loss. We have also shown its ability to enhance mitochondrial function (safely), which allows for increased energy production.

Dietary supplementation of ALA successfully prevents heart damage induced by reduced blood supply as is seen in heart attacks. Presently its primary therapeutic use is for the treatment of diabetic induced nerve dysfunction (neuropathy). This formulation can help prevent lipid peroxidation which is the end stage of free radical damage. It does this by reducing glutathione which in turn recycles vitamin E.

Acetyl L-carnitine (ALCAR) is a biological compound which plays a key role in the transport of fatty acids from inside the cell to the mitochondria for beta-oxidation. This is a crucial step for energy production. ALCAR controls the metabolism of sugars, lipids and amino acids, thus playing a pivotal role in cellular energy and turn over of cell membranes and proteins. A positive effect on survival was observed in rats treated with ALCAR (Markowska et al 1990). The mechanisms of this effect are currently unknown, but they are very similar to the survival observed in rats fed a restricted caloric diet. Chronic treatment with ALCAR enhances stimulation of antioxidant defenses. It also enhances learning and memory abilities possibly due to its ability to increase the release of acetylcholine. Pretreatment of old rats with ALCAR was able to bring back the levels of mitochondrial transcripts to adult levels in a time and dose-dependent fashion. Furthermore, studies in our laboratory have shown improved hearing in aged subjects compared to controls. Additionally, the treated subjects had improved mitochondrial function, energy production and there was evidence for a reduction in mitochondrial damage (Seidman et al Am J of Otol 2000).

ALCAR is capable of restoring the integrity of the cardiac mitochondrial membrane altered by aging, thereby restoring the normal activity of cytochrome oxidase, adenine nucleotide translocase, and phosphate carrier. This allowed more efficient energy production and results in improved cardiac performance in the aged.

Coenzyme Q-10 (CoQ-10) is crucial for mitochondrial function and is essential in the generation of energy. It was first recognized in 1957 as a component necessary for oxidative phosphorylation (the process by which the mitochondria makes energy). Reduced CoQ-10 functions as an antioxidant and can therefore combat the production of free oxygen radicals. There is evidence supporting an age-related decline of CoQ-10 in humans and other species, thus further supporting the membrane hypothesis of aging. CoQ-10 is currently used alone or in combination as a health/nutritional supplement. It has shown promise in enhancing heart function and has been used medicinally in European countries for this purpose. In this regard, it is gaining momentum in the USA. It may also be useful in cognitive and other neurologic disorders (i.e. Alzheimer's disease and diseases that produce muscle weakness such as certain muscular dystrophies).

Glutathione (L-K-glutamyl-L-cysteinyl-glycine; GSH) detoxifies reactive oxygen species (it acts as an antioxidant). It is also involved in the metabolism and detoxification of certain drugs. Mitochondrial glutathione is critical to cell viability and is a primary antioxidant defense system within the mitochondrial. Additional functions include intracellular binding, transport of lipophilic substances and prostaglandin synthesis.

These supplements are made with the finest natural ingredients. Several of the ingredients cannot be obtained from natural sources and then only the highest quality manufactured ingredients are used. An example is acetyl-l-carnitine which can be found in small quantities in broccoli, but approximately 15 pounds would have to be ingested to obtain the amounts provided in our patented Anti-age/Energy Formula. 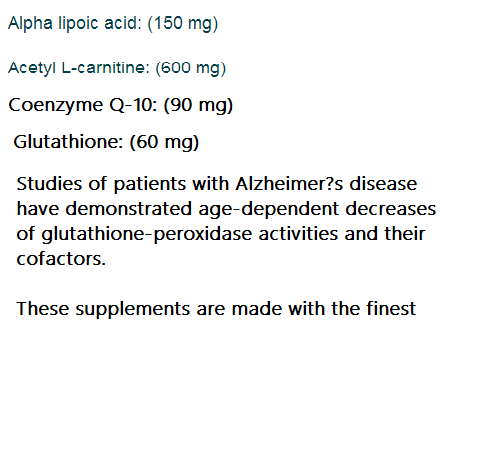 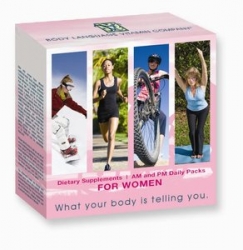 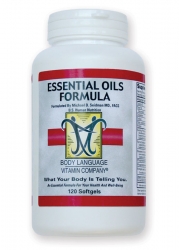 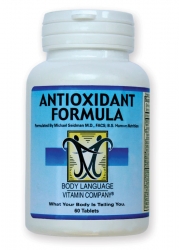